Watching Baz Luhrmann’s 2013 version of The Great Gatsby has made me realise just how much my reading of the novel has changed over the years. When I first read it as an impressionable seventeen-year-old I didn’t really notice Nick – all my attention was focused on the mysterious central character, the man whose capacity to dream, whose desire to capture the love he lost has led him to amass a colossal fortune. There was something irresistibly romantic about him, and in the 1974 film version Robert Redford looked just the part in his white suit.

I have read the novel many times since then, and each reading has further cemented the realisation that, as it is impossible to separate the eponymous hero from Nick’s presentation of him , the novel is as much about Nick as it is about Gatsby.  Luhrmann’s film underlines this sense;  drawn as we are by Leonardo DiCaprio’s Gatsby, the film foregrounds Tobey Maguire’s Nick throughout, reminding us that the film, just like the novel, is emphatically his.

‘The Great Gatsby’  is narrated not by Gatsby or by a third-person narrator, but by Nick Carraway, the mid-Westerner who comes East to learn the bond business, ends up living next door to the man called Gatsby and gets involved in the events of one summer which cause him to return home wanting ‘no more riotous excursions with privileged glimpses into the human heart’. Once home, Nick starts to write, in retrospect, about his experiences. Fitzgerald makes clear throughout that Nick is not just the narrator – he is also the novelist.  When Nick first mentions Gatsby he describes him, significantly, as ‘the man who gives his name to this book’,  in Chapter Three he says that he has been ‘reading over what I have  written so far’, and in Chapter Eight he says to the reader  ‘now I want to go back a bit’.

By making us aware that Nick is shaping his story , Fitzgerald reminds the reader of what might be Nick’s overall design, namely to make us think favourably of Gatsby. Nick may admit to an ambivalent attitude towards him – he ‘disapproved’ of Gatsby ‘from beginning to end’, he says that Gatsby ‘represented everything’ for which he has an ‘unaffected scorn’ –  but, as Nick tells us in the opening pages, Gatsby ‘turned out all right at the end’.  Nick, throughout the novel, wants us to see Gatsby his way.

Even when we think we are being given direct access to Gatsby’s thoughts close examination shows that it is merely Nick’s idea of what they might have been. In Chapter VI, for example, Nick describes Gatsby’s early years : ‘ But his heart was in a constant, turbulent riot. The most grotesque and fantastic conceits haunted him in his bed at night. A universe of ineffable gaudiness spun itself out in his brain….’  Whose language is this? Whose thoughts are these? They seem to be Gatsby’s and a casual reading might lead us to think we are reading a third person omniscient narrative, but it is clear that this imaginative language is that of narrator Nick, the novelist, the man who admits ‘I was rather literary in college’ . The description of Gatsby’s  and Daisy’s first kiss (also in Chapter VI) is similar:  ‘He knew that when he kissed this girl and forever wed his unutterable visions to her perishable breath his mind would never romp again like the mind of God’.  Again, this is clearly Nick’s language, Nick’s imagery. He may add ‘through all he said’ as a way of reminding us that this is what he was told by Gatsby and he is merely reporting it, but it is unlikely that Gatsby (the man for whom the phrase ‘old sport’ is a bold linguistic adventure) would use these words or even have these ideas.

Nick’s narrative is peppered with phrases such as ‘I suppose’ , ‘I think’, ‘there must have been’  and words like ‘possibly’  ‘perhaps’ and ‘probably’ ; all these suggest that our response is not to Gatsby, but to Gatsby filtered through Nick’s imagination.  This is why Baz Luhrmann’s representation of Nick makes so much sense. The film is framed  by the narrative of Nick as a recovering alcoholic who is in some kind of institution. He is encouraged to write as a form of therapy and the film is Nick’s process of getting it down and making sense of it all (Luhrmann reminds us of this by flashing words of the text onto the screen throughout).This seems a perfectly valid interpretation because Nick is, indeed, in a process of recovery – he has come back from the East wanting ‘the world to be in uniform and at a sort of moral attention forever’. He needs some stability and he needs to make sense of his experiences. 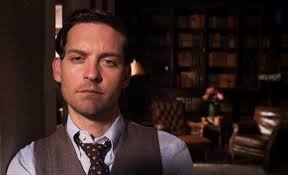 There are many things Nick needs to recover from, several areas in which he might be in need of therapeutic treatment. One of these is his inability to commit. He went East to ‘learn the bond business’ but also to avoid being ‘rumoured into marriage’ . His affair with Jordan peters out and ‘he even had a short affair with a girl’ but it comes to nothing. Strangely, we are told very little about the details of his relationship with either, or with the girl back home, and this underlines our sense that Nick might not be telling the whole truth.  We never know how much we should trust him.

Nick also needs to recover from his feelings for Gatsby.  Fitzgerald has Nick name the novel  ‘The Great Gatsby’, the ‘great’ lending Gatsby not only a seal of approval but also some kind of mythical, legendary status.  In the Luhrmann film, though, this ‘great’ is rightly made questionable. In the final shot of the film we see Nick’s completed ‘therapy’ notebook, the novel he has been writing for us, the film we have just been watching. It is called, simply, ‘Gatsby’. With his pen Nick adds ‘The Great’ to the title making us realise that this is his judgement, and not necessarily one with which we should agree.

Perhaps Nick thinks of Gatsby in these terms because his feelings for him are so strong he cannot see him clearly. It could be argued that Nick has, in fact, fallen in love with him, that he is more attracted to Gatsby than he is to the woman back home, or to Jordan, or to the woman he has a short affair with. That he might prefer men to women could be suggested by the strange unexplained situation he ends up in with McKee after the party in the apartment ( a scene filled with sexual suggestion which Luhrmann chooses to omit, preferring to show Nick making out with Myrtle’s sister at the party). It could be suggested  by the way his attraction to Jordan is expressed in such masculine terms (she has an ‘erect carriage’ and looks like a ‘young cadet’) and the way, when he thinks of the girl  back home,he also sees her in male terms (‘the faint moustache of perspiration’). This could be why Nick describes Gatsby’s ‘tanned skin’ as ‘drawn attractively tight on his face’. Maybe it is Nick’s attraction to Gatsby which makes him so keen for his readers to approve of him, leading him to be so vague about the nature of his illegal activities. Has Nick over-romanticised a mere criminal? Gatsby’s belief in the green light is perhaps the belief of a deluded dreamer, the distorted dream of a mere fraudster and,  in the same way, Nick’s belief in Gatsby (‘you’re worth the whole damned bunch put together’) could be the dream of someone equally deluded.

Many  have been appalled by what Baz Luhrmann has done to the text. He has, of course, taken liberties.  Its soundtrack, produced by Jay-Z,  anachronistically blends hip-hop, jazz, and other genres to recreate the energy and excitement of the Jazz Age, and several key moments in the novel are omitted (the appearance of Gatsby’s father, for example). Whereas the 1974 film version is characterised by a sense of dutiful reverence for the text, Luhrmann’s is marked by a playful, post-modern irreverence. Some of the changes he makes are more successful than others, but the way he develops Nick’s role as the troubled ‘creator’ makes a good deal of sense, emphasising the uncertainties and ambiguities so central to the text, and reminding us that, though Fitzgerald is the novelist who wrote The Great Gatsby he presents it as the work of another.

We use cookies to ensure that we give you the best experience on our website. If you continue to use this site we will assume that you are happy with it.OK